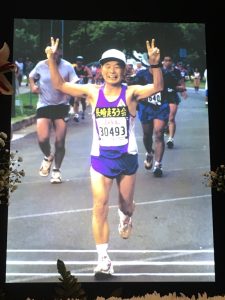 The sound of B29 never ceases in my ears

It was clear and hot on the morning of August 9th, 1945. The air-raid siren went off but soon stopped. I came out of the muggy shelter with other people. I was twelve years old. I went catching the cicadas at the hill near Zenza National School, came home, and was taking a break upper body naked. Then, I heard the buzzing sound of B-29, which we were familiar with by that time.

At the next moment, a strong light flashed, and the house crushed over me. I thought I would die under debris in the darkness, but my mother pulled my legs and helped me out. When we looked down the city from the hill, all the buildings were collapsed, all the roads were covered with debris.

I evacuated to Zenza National School with my mother and two sisters with my leg and arm seriously injured. We spent the night in the shelter in front of the school. At night, we saw the whole city of Nagasaki was on red fire. The next day, I received first aid with red Mercurochrome near the Shotoku Temple and was brought to Katsuyama National School. I laythere for a few days side by side with blackened dead bodies. My youngest sister was found under the house dead on the 10th.

About a month before the bombing, a B-29 airplane scattered flyers, “Nagasaki, Sweet City of Flowers, But becomes a City of Ashes in July or August” I never imagined it would come true.

I had seven siblings. My mother and four siblings were affected by the bomb. The two were at a relative’s house outside of Nagasaki. My father was in China at war and came home four years after the war was over.

On the 14th, we moved to my mother’s relative’s house in the countryside of Takagi-Cho, Isahaya City. From the train on the way, I saw lots of black corpses piled up floating down under the Ohashi bridge of the Urakami River. On the 15th, the adults were weeping, who heard about Japan‘s defeat in the war. I was scared, but finally got treatment for my injured left leg and arm.

In October, I was able to walk again and got to the school in the area. I was happy that I could study. I couldn’t during the war. My family couldn’t afford for me and my siblings to go to high school. I started working at Mitsubishi Electric Company at age 15 and attended night programs at Isahaya High School after work. I finally got the certificate after two challenging years. I struggled a lot to build my life, but it was a blessing that I didn’t suffer from the after-effects of the atomic bomb even I was at a 1.2 km distance from ground zero.

I worked at Mitsubishi for 45 years and retired in 1993. I started running after that to cure my diabetes. I ran some international races abroad. In November 2001, I joined New York City Marathon just after 9.11. I saw the twin towers of the Trade Center were gone. After I finished the race, I raised my voice, “Peace from Nagasaki!”. Many runners from around the world came to me, and we held each other’s shoulders, which was my beautiful memory. I felt I brought a message about peace from Nagasaki.

Some high school students in Nagasaki started a movement of collecting ten thousand signatures, bringing it to the United Nations to appeal for the abolition of nuclear weapons. Wonderful! I believe the main role of the UN is to make world peace by accomplishing coexisting and co-prosperity. I expect the leadership of the UN to strive to end the conflicts of the world to attain peace. We, the survivors, and other peoples in the world have been longing for it.